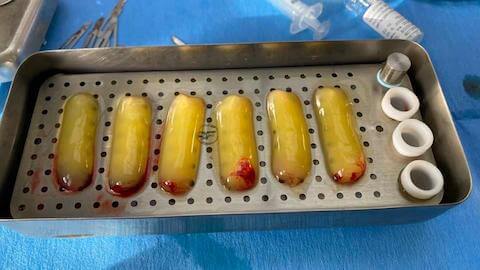 What is PRF treatment in dentistry?

The purpose of PRF treatment is to extract from a patient’s blood sample the key elements and to prepare it in a clinically usable form such as a membrane or plug (A-PRF, L-PRF) or injectable liquid (i-PRF).

PLATELETS, LEUKOCYTES and STEM CELLS are the key active elements trapped in the fibrin matrix which will be connected with local tissues (bone and soft tissue) to accelerate new blood vessel formation and enhance its healing and regeneration potential.

These components all act naturally and in synergy to stimulate, improve, and accelerate tissue healing and to regenerate soft or bone tissue (Dohan, et al., 2014), including cell proliferation and differentiation, extracellular matrix synthesis, chemotaxis, and angiogenesis (Kawase, 2015).

The 3D architecture provides the PRF membrane with great density, elasticity, flexibility, and strength that are excellently suited for handling, manipulation, and suturing. These autologous membranes (with a dense fibrin network) are strong – a single membrane can withstand a load of ± 500g. They also have excellent biological properties – they are rich in platelets, growth factors, and cytokines – which opens many new clinical avenues. PRF membranes remain solid and intact in vitro and continuously release large quantities of growth factors for between 10 and 14 days.

The strong three-dimensional fibrin network functions as an “adhesive” scaffolding material for endothelial cells involved in angiogenesis (new blood vessel formation) to adhere to, proliferate, and concentrate at the site of wound healing and tissue regeneration. It is these growth factors (i.e., vascular endothelial growth factor [VEGF]) that attract endothelial cells into the fibrin to stimulate formation of new blood vessels (Pradeep, et al., 2012).

With these different growth factors, adhesion molecules, and other mediators, platelets have the ability to initiate and modulate host immune responsiveness through recruiting and influencing leukocytes, neutrophils, monocytes, and endothelial cells, as well as lymphocytes to sites of tissue damage or infection.

Platelets are not the only blood cells that release growth factors, but leukocytes and erythrocytes also contain TGF-β1 and VEGF . The presence of these growth factors (TGF-β and VEGF) are important for stimulating cell proliferation, matrix remodeling, and angiogenesis during healing processes and tissue regeneration (Dohan, 2009; Del Corso, et al., 2009; Keceliet, et al., 2015).

Leukocytes are the cells of the immune system that are involved in protecting the body against infections or foreign bodies. Different types of leukocytes are concentrated in the fibrin matrix, namely lymphocytes (T-lymphocytes, B lymphocytes), monocytes, and neutrophilic granulocytes.

Monocytes are in essence the “vacuum cleaners” of the body. They migrate into the wound or inflamed area after the influx of neutrophils, where they then become macrophages (Gupta, et al., 2015). The macrophages collect and remove all the dead, necrotic, bacterial, or foreign particles in the wound site. This function is essential for healing and regeneration of tissue.

PRF significantly stimulated MSC proliferation and osteogenesis in vitro. Studies has shown that MSC sheets injected with or without PRF formed new bone, but those with PRF produced significantly more and denser bone. PRF increases the osteogenic capacity of MSC sheets in vitro and in vivo.

The introduction of Platelet Rich Fibrin as an autologous biomaterial has set in motion an exciting and promising era in the advancement of tissue healing and regeneration in the fields of implant dentistry, periodontology and oral surgery. The concept of generating a cell-seeded fibrin matrix, solely by drawing the patients’ own blood and centrifugation for a few minutes is truly revolutionary in terms of clinical practicability, as it can be made easily at chairside in a short period of time.

If you liked this article check out our social media pages for more content.

If you liked this article check out our social media pages for more content.

Dr Johan Hartshorne and Howard Gluckman examine the definition, development, biological characteristics, and function of PRF in all its many guises

← PRF in dentistry, benefits of using PRF in dental surgery PRF use in dental implantology →
Sing up for our newsletters

We use cookies on our website to give you the most relevant experience by remembering your preferences and repeat visits. By clicking “Accept All”, you consent to the use of ALL the cookies. However, you may visit "Cookie Settings" to provide a controlled consent.
Cookie SettingsAccept AllRead More
Manage consent

This website uses cookies to improve your experience while you navigate through the website. Out of these, the cookies that are categorized as necessary are stored on your browser as they are essential for the working of basic functionalities of the website. We also use third-party cookies that help us analyze and understand how you use this website. These cookies will be stored in your browser only with your consent. You also have the option to opt-out of these cookies. But opting out of some of these cookies may affect your browsing experience.
Necessary Always Enabled
Necessary cookies are absolutely essential for the website to function properly. These cookies ensure basic functionalities and security features of the website, anonymously.
Functional
Functional cookies help to perform certain functionalities like sharing the content of the website on social media platforms, collect feedbacks, and other third-party features.
Performance
Performance cookies are used to understand and analyze the key performance indexes of the website which helps in delivering a better user experience for the visitors.
Analytics
Analytical cookies are used to understand how visitors interact with the website. These cookies help provide information on metrics the number of visitors, bounce rate, traffic source, etc.
Advertisement
Advertisement cookies are used to provide visitors with relevant ads and marketing campaigns. These cookies track visitors across websites and collect information to provide customized ads.
Others
Other uncategorized cookies are those that are being analyzed and have not been classified into a category as yet.
SAVE & ACCEPT
0
0
Your Cart
Your cart is emptyReturn to Courses
You might also be interested in this Implantology related course:
Continue Shopping
Apply Coupon